Microsoft Office Curriculum: What You Need to Know for 2016

Is your Microsoft Office curriculum ready for Office 2016? Microsoft Office 2016 was released in the summer of 2015. So it's just a matter of time before your school computer labs and laptop carts begin to migrate, if they haven't already. If you teach computer applications, you need to make sure you are ready to go with compatible curriculum.

Perhaps the biggest changes to Microsoft Office 2016 involve the improvements and expansions to the collaboration features. Some other changes worth noting are improvements to Microsoft Outlook performance and enhanced security features. A lot of these features may be irrelevant to your middle or high school computer applications courses, as they don't necessarily effect things like how to create a table in Word and how to add media to a PowerPoint. But it's still a good idea to make sure you don't need to make any big changes to your Microsoft Office curriculum.

Here are some great articles, summaries, and charts showing what's new in Microsoft Office 2016 and what's different between 2016 and prior versions. 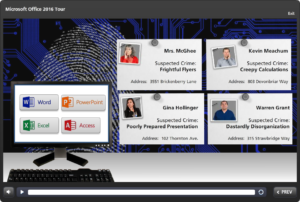 The difference between 2013 and 2016 at the level we teach is minimal. However, there are certainly some visual changes. We've made changes to the screen images that help students locate items in the Microsoft applications. It's important for student learning to keep these images as accurate as possible.

That being said, Microsoft Office 2016 has made changes to the various customization settings and window sizes that can be used. For example, the Office Background can be changed to options such as Circle and Strips, Underwater, and No Background. The Office Themes can also be changed. Some options are Colorful, Dark Gray, and White. Additionally, the wider you make the application window the more individual commands are displayed. Likewise, the smaller the window, the more commands are grouped together. Regardless of these visual differences, the same commands are still available. The screen images may slightly differ from your students' actual screens, depending on how screen features have been customized on individual computers and devices. All of that is explained to students before they begin using the lessons and applications.

There are also a few changes to the step-by-step instructions. One change made is the addition of more instructions and narration to the fundamental Microsoft Office curriculum units. These changes were more of a result of feedback from Business&ITCenter21 users than from a Microsoft 2013/2016 change. We added instructions and narration where it seemed more information was needed for students to get through the lesson with greater success and challenge.

What Do You Need to Do to Get Microsoft Office 2016 Curriculum? 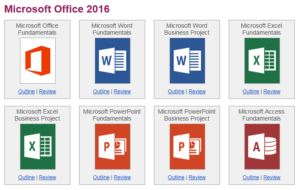 When the Business&ITCenter21 Microsoft Office curriculum for 2016 is released, you can simply add the appropriate modules to your courses. The modules will be indicated by the 2016 notation.

Our recommendation would be to find out when your school plans to upgrade to Office 2016. If it's going to occur in the middle of the school year or in the middle of a semester, you'll want to coordinate having students complete whatever 2013 module they are working in around the same time that the upgrade will take place.

After your computers or devices are running with Office 2016, you can add the 2016 modules to your course and have your students start the next module from there.

So while the changes to Microsoft Office 2016 may not be catastrophic to your Microsoft Office curriculum, you can rest assured that your Business&ITCenter21 content will be updated and ready to go when you are!

Sarah has been with AES since 1998, first serving as a curriculum developer, and now as a customer support analyst and content creator. She is committed to helping instructors gain experience and confidence using our solutions and to providing excellent customer care.