Why a Computer Teacher Used the Same Digital Curriculum — Twice

"Once I found your program covers all of the standards I need to teach, it was a goldmine."

With nearly two decades of experience and a Master’s degree in educational technology, she’s truly teaching her passion every day.

Treena discovered her life’s calling while taking a business class in 11th grade. That teacher — along with Treena’s mother, who also taught — helped her unearth her passion for teaching before she even graduated high school.

Fast forward a few years, and now Treena is using her business expertise and technical savvy to teach hundreds of students each semester.

It’s even helping her change lives.

Specifically, Treena has started using Business&ITCenter21 to teach technology in the classroom. It cuts down on work time outside the classroom, it meets state standards, and it engages students every day.

In fact, Treena liked Business&ITCenter21 so much that she’s used it twice — once at her previous job in Clay County, and now at her current position in Douglas County.

Today, these are the five ways she’s using it to take her classroom to the next level.

1. Planning Took Too Much Time

Like many high school teachers, Treena has hundreds of students each marking period.

She has three sections of Introduction to Business Technology, which range from 28 to 32 students each.

With a grand total of nearly 200 students in a marketing period, Treena spent a lot of time planning lessons every week.

Sunday was her prep day. Every week, she’d spend three hours looking for lesson plans, integrating them into her curriculum, and making them work with the other material in her syllabus.

“Pulling together lessons and assignments that could fit everybody in the classroom, that was the biggest challenge,” Treena says. “It just took a lot of work. It wasn’t all in one place. Nobody gave it to you.”

To make matters worse, Treena had to help coordinate the lessons for the entire county so students would meet Georgia’s CTAE course standards.

All told, this process took up two weeks of Treena’s summer, and she still went into school the weekend before school and early Monday morning to make sure everything was ready.

All of that extra time motivated Treena to look into Business&ITCenter21.

Now, she only spends 30 minutes every week planning her lessons. Every Friday afternoon, she takes a quick look to make sure everything is ready to go. 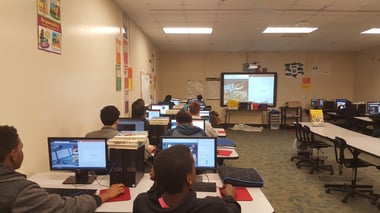 Then, Treena can start her weekend.

Treena even talks about this with her coworkers. In fact, she knew one of her colleagues who spent all day Sunday preparing lessons for the coming week.

He didn’t want to use Business&ITCenter21 at first — he wanted to avoid using “canned curriculum” for his students.

But after Treena showed him how Business&ITCenter21 worked, he was convinced.

“When I introduced Business&ITCenter21 to him, he said ‘Why didn’t you tell me about this earlier?’” Treena says. “I said, ‘I tried to tell you!’”

But Treena had more issues to solve in her classroom than just planning.

She also needed a reliable resource for her students.

2. Textbooks Always Go Out of Date

As a technology teacher, Treena has a hard time finding textbooks that help her cover standards.

“Sometimes textbooks are antiquated, depending on what information they’re covering,” Treena says. “A lot of them are just outdated. Besides that, they’re boring and they just don’t cover everything as well.”

Treena’s big advantage in her classroom is the access she has to computers. Finding up-to-date resources that let her use those computers was important.

Because technology advances at a rapid pace, textbooks just couldn’t keep up.

That meant Treena needed instructional materials that could be updated to reduce the risk that her students would learn outdated information.

Business&ITCenter21 solves that issue. It's regularly updated with new information, and the updates are always free for the teachers.

If something changes, Treena's students will know about it.

That's a major advantage, too. After all, Georgia has a lot of educational standards, and it's crucial that Treena meets them in her classroom.

Georgia — where Treena teaches — has firm standards for what students need to learn in computer courses.

Business&ITCenter21 meets a lot of Georgia’s state standards — and that’s no accident.

“Once I found your program covers all of the standards I need to teach, it was a goldmine,” Treena says.

That has also become an incredible time-saver, in addition to the lesson plans Treena uses on a regular basis.

Planning for standards “is not really needed anymore because it’s done,” Treena says. “It’s all there.”

With effective lessons, up-to-date resources, and completed standards, Treena only had one more job for her students.

She had to hold their attention.

For Treena, one of the most important parts of Business&ITCenter21 is its ability to cater to individual students.

“The nice thing about Business&ITCenter21 is that students can go at their own pace,” Treena says.

In addition, Treena’s students aren’t locked into learning from one source for an entire class block.

Instead, they can change gears. They can interact with one another. They can follow along as Treena goes through lessons with a projector.

Treena builds this differentiation into her classroom structure every day.

Treena sometimes has extra time to fill, depending on how much time each part of her class takes.

That’s where her students can do more self-directed work — including Gmetrix — especially if they haven’t finished everything they needed to get done.

Sometimes, that could mean finishing work outside of class.

“I tell students to go home and finish whatever it is they were not able to finish in class,” Treena says. “I think that’s one of the great benefits of this program because they can go home and finish up or make up work. It has definitely worked for me.”

Regardless of how her students do it, they all get through the work Treena sets up in Business&ITCenter21.

The results have been excellent.

But Treena has found an even more incredible use for Business&ITCenter21 in her computer class.

It’s not just an educational tool.

When Treena thinks about her proudest moments as a teacher, one student quickly comes to mind.

She was a young woman who had a hard time with technology, specifically computers. There was a lot to learn in Treena's classroom, and it used computers intensely.

“When she came into my class, she was scared of the computer,” Treena says. “She had no interest. I don’t think she wanted to be in my class.”

But over time, Treena’s student came around.

“By the time she finished the course, she did end up being certified in Microsoft Office,” Treena says. “In terms of reward, she has been just a huge success for me, I would say.”

That relationship didn’t stop when Treena’s student left the class, either.

In fact, Treena and her former student are still active in each others’ lives.

“We still talk every week,” Treena says. “Teaching can be a thankless job. You feel like you have so many students and so much work to do — everyone just kind of takes, takes, takes all the time. But when you develop the relationships with your students — the ones that you feel like you’re really able to reach — that’s why you keep coming back.”

Discover the Benefits of Digital Curriculum

Treena has had an incredible experience with Busines&ITCenter21.

You can get those results, too!

Try Business&ITCenter21 for 30 days for free.

Start customizing your classroom, engaging your students, and building the relationships that can change students’ lives.